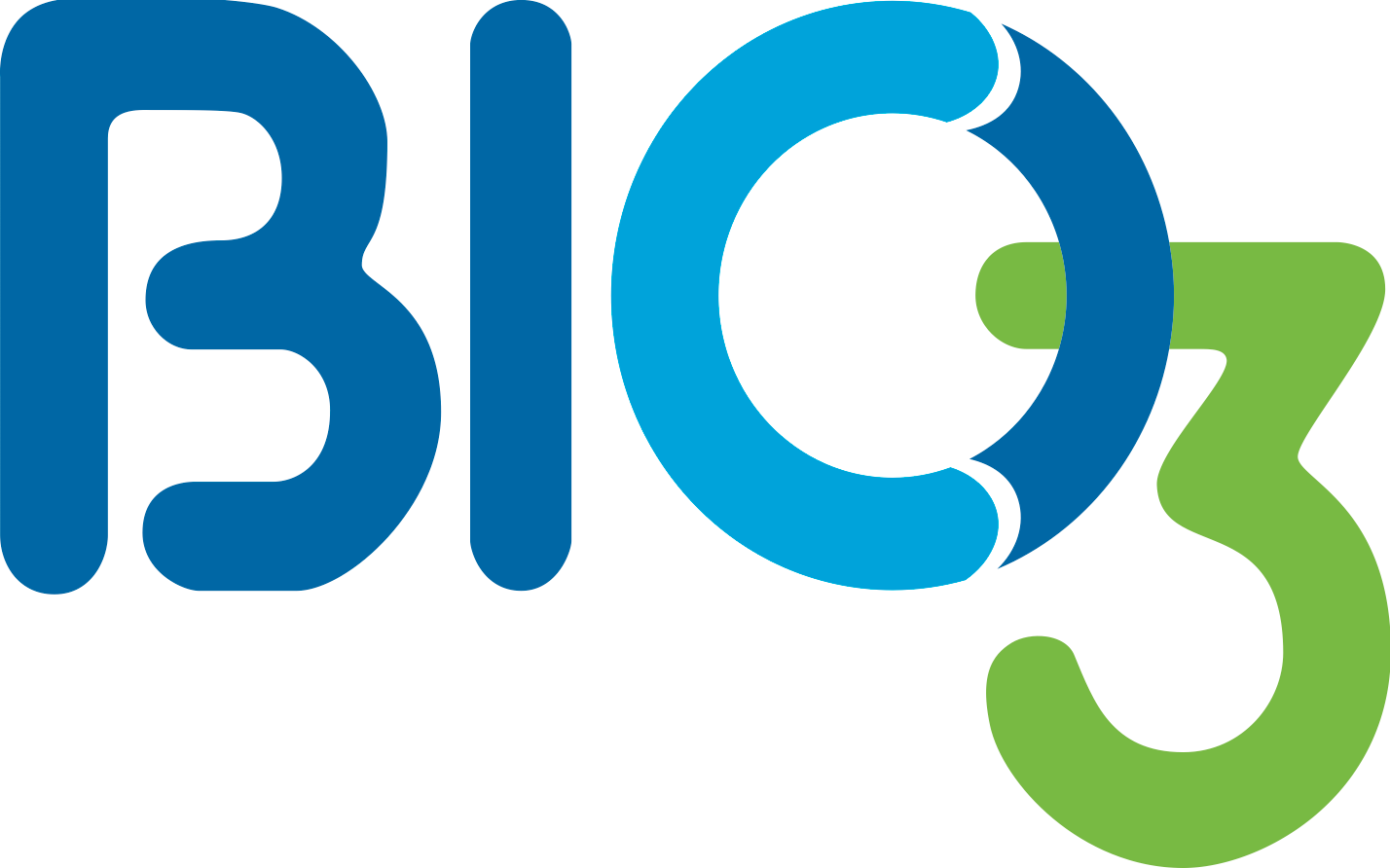 Scientists from our institute invite to the meeting “Sensory and Regulatory RNAs in Prokaryotes”, from July 18-19 this year in Freiburg.

The registration for the “Sensory and Regulatory RNAs in Prokaryotes Meeting” is now open.

Please visit our homepage for registration and abstract submission. The meeting will be free of charge and the extended registration/submission deadline is June 03 – 2019.
Feel free to share this news with colleagues, collaborators and students.

We hope to see many of you in Freiburg! 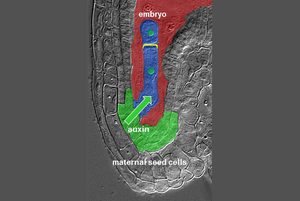 The hormone auxin accumulates in the area of the seed where the embryo is connected to the maternal tissue. Source: Thomas Laux

An international team led by the Freiburg plant biologist Prof. Dr. Thomas Laux has shown that mother plants guide the development of their embryos using the hormone auxin. In the future, this result might help breeders grow plants that are more resilient in the face of environmental challenges. The researchers published their study in the journal Nature Plants.

When embryos develop inside their mother, their well-being depends on the nurture provided by the maternal tissue. Mutations in the maternal tissue may result in defective embryo development. In seed-bearing plants such as grains, the embryos develop in unison with the surrounding tissue of the mother plant. Laux and colleagues therefore posited that there must be a form of communication between the mother plant and the embryo that guides the early stages of development after fertilization.

Chulmin Park, doctoral researcher in the group of Laux, observed in pollinated flowers of the model organism Arabidopsis that the hormone auxin accumulates in the area of the seed in which the embryo is connected to the maternal tissue. Auxin is used by plants to control a variety processes ranging from organ development to defence against pathogenic microbes. The Freiburg biologists have shown that embryo development is disturbed when the production of auxin by the maternal cells is blocked. However, artificial activation of auxin biosynthesis in the embryo cells, which are normally unable to produce this hormone in early stages of development, allowed the embryos to develop normally without a maternal auxin supply. With these results, the researchers demonstrated that mother plants use this signalling molecule in order to communicate with their offspring and guide the earliest stages of their development. Since they made similar observations in maize, the researchers speculate that the mechanism they discovered may be widespread in plant species.

This finding could also contribute to the optimization of biotechnological plant propagation. “Plants could be bred faster and more efficiently so that they can adapt to unfavourable environmental conditions and climate change, for example”, Laux explains.

Thomas Laux heads a laboratory at the Institute of Biology III and is a member of the BIOSS Excellence Cluster of the University of Freiburg.

A Pair of RNA Scissors with Many FunctionsKarsten Voigt, 26th May 2018

CRISPR/Cas systems are known as promising “gene scissors” in the genome editing of plants, animals, and microorganisms by targeting specific regions in their DNA – and perhaps they can even be used to correct genetic defects. A team of scientists led by Juliane Behler and Prof. Dr. Wolfgang Hess from the University of Freiburg have now identified an enzyme, a special pair of RNA scissors, which is involved in CRISPR/Cas systems and the correct regulation of gene expression – in other words, in reading genes and translating their information into proteins. The researchers have published their work in the scientific journal Nature Microbiology.

Natural CRISPR/Cas systems can be found in most bacteria and archaea, where they form a microbial immune system with which these organisms can defend themselves against viral intruders. In order for this line of defense to work, a long RNA molecule must first be cut into smaller units. An enzyme is therefore used as a pair of RNA scissors to cut the RNA molecule and “arm” the system. Natural CRISPR/Cas systems often function autonomously: They can be exchanged between different bacteria quickly, and they are not dependent on other proteins in their host cells. An exception to this can be found in the popular CRISPR/Cas9 systems, in which the host enzyme RNase III acts as RNA scissors.

The scientists from the University of Freiburg, who are studying CRISPR/Cas systems, have now demonstrated that the enzyme RNase E acts as RNA scissors in the CRISPR/Cas systems of cyanobacteria. This enzyme is very common, and it can be found not only in photosynthetic cyanobacteria, but also in pathogenic bacteria and plant chloroplasts. It is an important factor for the correct regulation of gene expression within all these groups of organisms. What was not known until now, however, was that it also plays a role in CRISPR/Cas systems.

The team’s research shows that the interaction of CRISPR/Cas systems with the cellular mechanisms of their host organisms is stronger than previously suspected, meaning there could be greater potential for the use of such systems.

Funding for the team’s research came from the Deutsche Forschungsgemeinschaft (German Research Foundation) as part of a grant for the research group Forschergruppe FOR1680: Unravelling the Immune System. Wolfgang Hess is currently a fellow at the Freiburg Institute for Advanced Studies (FRIAS) at the University of Freiburg.

Many tumor diseases are caused by an overexpression and deregulation of signaling proteins promoting the prolonged survival and continuous growth of cells. This is also the case for the most frequent hematological tumors in humans namely B cell leukemia or lymphomas also called blood cancer. These tumors often employ the signaling pathways of the B cell antigen receptor (BCR) and its coreceptor CD19 for their extensive growth and metabolic fitness. How exactly these tumors combine BCR and coreceptor signaling was so far unknown.

The research team led by Prof. Dr. Michael Reth and including Dr. Jianying Yang and Dr. Xiaoxui He has now discovered a new pro-survival receptor module on the surface of the human Burkitt lymphoma B cell line Ramos. The scientists have published these findings in the EMBO Journal.

The full article can be found on the Bioss website.

Immunologist is new member of the „National Academy of Sciences”. 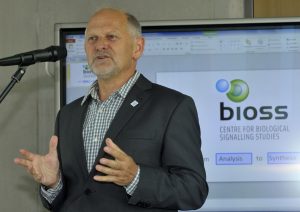 The Immunologist Prof. Dr. Michael Reth, Institute of Biology III, Faculty of Biology of the University of Freiburg has been elected as a new member of the “National Academy of Sciences” (NAS). By that decision, the NAS honours his studies on signal-transduction in B-Cells.  With his research Michael Reth elucidated fundamental mechanisms of immune-cell-activation by the discovery of sub-units of the B-cell-receptor (BCR). The membership in the NAS is considered to be one of the highest awards within the scientific community. Michael Reth is the first professor of the University of Freiburg who received this award.

The full press release can be seen here. (in German)